All of us dream of being dealt monster hands or hit marvelous flops. What can be nicer than see the “pocket rocket” in your hand, or matching you 8,9 pocket cards with a 6,7,T flop? In many cases, your pre-flop raise will face a massive fold and you’ll end up collecting the blinds with your pocket aces.

To get the most from a monster hand, both online poker players and live players slow play their hands sometimes. Slow playing a hand means checking/calling although you believe you have the best hand. The slow play might be used in the pre-flop with a monster hand, or after the flop is dealt. I’ve seen at many online poker rooms players who slow play their hands even on the turn and river, just to get some more chips from their opponents. 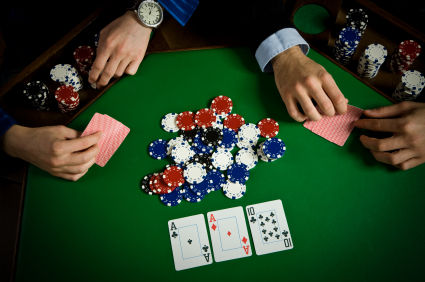 There are two big advantages of slow playing a monster hand: your opponents won’t have a clue about what your whole cards are and they are more likely to join the pot instead of folding. This means that you can gather a higher pot before attacking it. Let’s consider you have pocket kings on early position. You call the big blind and a player from late position raises. You only call, and the flop brings 4,7,Q.

If your opponent hits the high pair with his J,Q he will think he is in front of you, because you just called pre-flop and you’re most likely not holding high cards. This is the situation where you can make a lot of money. In the early position you are the first to act, and your check will be followed by a raise. Call again, and your opponent will put you on a draw.

He will become more confident in his hand and will throw more money in the pot.

What would have happened in the same situation if you would have risen pre-flop? Your opponent with J, Q would have probably folded, since an early position raise indicates a very powerful hand.

There is also a drawdown of slow-playing. You risk having your monster overpowered by a weaker hand, if it hits the flop. You should not slow play your hand from a late position if nobody raised. You don’t get a bigger pot, you just give them a free glop/turn. Your KK can turn into garbage if an ace shows on the table.

Once I have beaten a player holding KK with my 2,3 big blind. He just called pre-flop, and I was able to see the flop for free and I hit two pairs. If I would have not hit the flop, I would have still folded, so he wouldn’t get anything. He just risked for nothing. And you may imagine that he strong played his KK after a 2,3,T flop.

Poker sharks slow play their hands in certain situations, mostly when holding the nuts or a hand that is very hard to overpower.

They usually slow play only made hands on the flop, like straights, flushes, trips or higher. I wouldn’t recommend slow playing on low stakes tables or on limit games. You should also pay attention at draws before slow playing your hand. Written by: Abscident