When it’s time to think about going beyond Texas Hold’Em in your poker online play, you might wonder why you would even bother. After all, it’s pretty safe to say that Hold’Em is definitely going to be around for a long time, which means that there are plenty of players to go toe to toe with and try to take their chips — and the money that it represents. However, the argument can be made because a good poker player needs to keep their skills sharp no matter where they go. You don’t want to end up missing out on the power to change your poker game, do you?

Yes, that’s right — by playing different variations of poker, you will be changing the way you see the game. That can help you identify weaknesses that you didn’t even know were there, which means that you will ultimately be able to handle higher skilled players better than you might have otherwise. It’s even arguable that playing other games like bingo will further enhance certain skills that can help you at poker.  Bingo is a highly social game that may help you with your poker bluff!

If you’re thinking on the right track, then you know that you have to branch out eventually. Even though it might not seem like it, there really is life outside of Texas Hold’Em, and you need to just make sure that you reach out and grab hold of it.

Below is a list of games that will take you beyond Texas Hold’Em. Don’t worry — the rules aren’t going to be so crazy that you won’t be able to catch on fast.

What makes 7-card stud so interesting is that it can be played with numerous players. Like Hold’Em, the more players that are in the game, the more challenging it’s going to be. The goal here is that you use 7 cards instead of just two cards to make the best hand possible. It’s played in limit fashion, so if you’re looking for no limit action, you’ll have to look elsewhere. 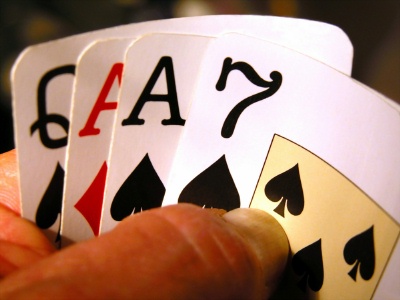 Hi-Lo is often called 8 or better, and it’s a variation of Omaha poker. You’ll be able to find it online easily enough, which means that you can practice more poker strategy. Generally speaking, you’re going to have to deal with some challenges in Omaha Hi-Lo that you won’t have to deal with in Hold’Em. For one, the fact that you have to deal with a high hand and a low hand is enough to get your brain bubbling. Add to it that you’ll have to try to win a high hand as well as the low hand to get the chips from both pots and you might have bitten off more than you can chew. Can you handle it? END_OF_DOCUMENT_TOKEN_TO_BE_REPLACED