When most people think of poker, they often think of middle aged guys that are balding and getting on in years. However, there is a lively section of poker that is filled with hot chicks. What could be better than that? Hot chicks, strategy, and playing for real money?

Of course, there are a lot of women associated with poker. Casinos have gotten smart and used a lot of models to interact with players for a very long time. However, there’s a world of difference between a poker playing babe and just a hired model that can’t tell the difference between a 3 bet and true power poker.

Let’s talk about one poker babe that definitely needs to get highlighted. Melanie Weisner is a seriously good poker babe that is starting to catch a lot of attention. Why?

That’s easy, check out her picture: 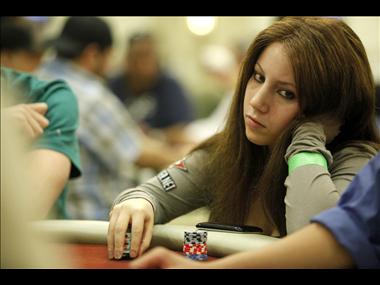 See what we mean? She’s definitely a hottie, and she can play real poker.

Weisner is a born and bred Houston native who used to pursue singing before going head first into poker. Like many, she was lured into the sport after seeing other people hit it big. Her brother was a poker player and showed her it was possible to win big in poker as well.

Get this: she earned 400 grand playing just part-time while being a student at New York University! Not only is she hot, but she clearly has talent for the game.

Online tournaments are her favorites, because it gives her a chance to shine. She took 3rd place out of over 10,000 entrants in the Pokerstars Turbo Takedown. She netted 40 grand from that little tournament — which is more than some poker players ever see in a lifetime! You don’t make that type of money hanging out playing on Facebook poker, right? Right.

That was in 2009 — the next year she hit two tournaments and got 24 grand and 50 grand respectively. Her other specialty seems to be heads-up sit and go tournaments, where she can hold her own against even some of the toughest power poker players around. END_OF_DOCUMENT_TOKEN_TO_BE_REPLACED