Practice may not make perfect, but it can make you money. Reading expressions, is a skill that can be honed to function almost automatically just as opening and closing your hand. That is to say, you don’t think it, then do it. You, what I call for fun, “thinkdo“.

I have only been working at this for a couple years, and as a result or side effect; I sometimes even read things in people I’m talking to normally. As in, way outside of the realm of poker, without even being conscious of trying. You’ll notice if it starts to happen, because at some point you’ll see something in someone, and say to yourself ‘Wow he/she just lied to my face…’ At that point you want to explain to the people closest to you that you have been developing this skill to avoid a lot of fighting and conflict.

Its been proven that on average, people lie, or omit something about 6 times per 30 minutes of conversation. Trust me. For the sake of both your personal, and poker life. The last thing you need is to bring emotional stress and baggage with you to the table.

That being said, I would like to get into another entry level emotional tell involving the mouth. I only say entry level because I’m going to explain how a person’s mouth reacts to when they are attempting to hide happiness; and the mouth can’t be kept from sight consistently.(as opposed to sunglasses over the eyes) The only way to hide the mouth, is to cover it. Usually with their hands, and they can’t continuously do that because it increases the amount of carbon dioxide that’s re-inhaled when they breathe. This causes a 10-20 bpm heart rate drop, and a minor deprivation of oxygen to the bloodstream, and eventually to the brain. The side effects of that definitely shows in their judgment over the course of a session, and to some extent their stamina.(These players tend to get up and take more breaks. *Note:When they come back they feel refreshed from breathing the casinos oxygen rich air, and increased blood flow from walking around). 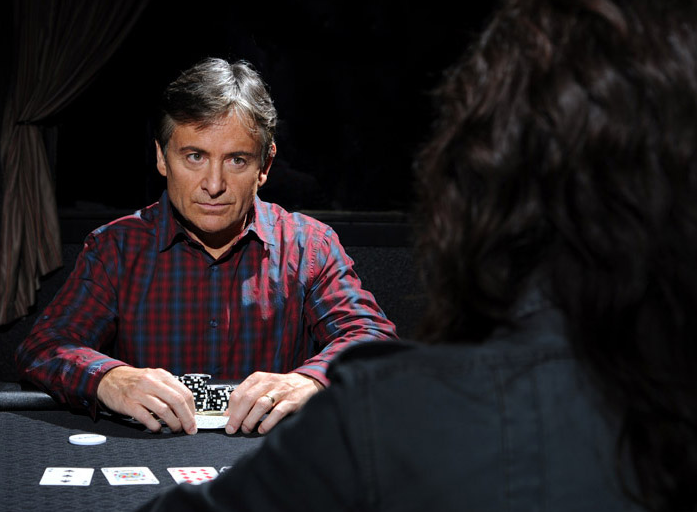 The mouth is very unique in how its controlled. The old wives tale that says it takes more muscles to frown, than to smile is not 100% true. There is more muscle INVOLVMENT in frowning, because when talking about a natural unexaggerated frown, most of the muscles are relaxing. The muscles that control your upper lip, is the only ones actually functioning here. When you smile, the muscles tighten, therefore are ‘worked out’ more and in turn are firmer. This is why a young person can get ‘frown lines’ and not smile lines. (not working your muscles anywhere in your body can cause them to weaken.)

When somebody feels the emotion of happiness, it is a natural reaction to smile. Obviously at a poker table, you don’t usually see that happen before the end of the hand. Well, most people don’t, because most people are looking at the center of the mouth, when they should be focusing on the corners. If you look a little closer you‘ll see the movements(you’ve probably been mistaken them for meaningless, or unhelpful twitches to this point). Different things *WILL* happen depending on the expression they are trying to hold. In my experience, this is how I have been successful in breaking it down.

The most common thing people try to do is press their lips together, or focus on not smiling, or frowning. So the end result is an almost perfectly ‘straight’ or ’flat’ appearance. But when they see something that makes them happy, both corners WILL move upward as if to smile. It’s a reaction, that CAN’T be completely controlled, even though people think that they DO control it, and easily. This cracks me up, because they really believe that theres nothing that could’ve given them away.(most of the time people just don’t notice.) But this is a micro expression for a reason. You will only have 1/15th of a second to see this. **AGAIN, THIS IS WHY IT IS IMPERITIVE TO WATCH YOUR OPPONENT WHILE THE CARDS ARE BEING DEALT/TURNED OVER.** Because that is when you are going to see things like this happen. Whether its pre, or post flop. Don’t look until they look. Preflop, don’t even touch your cards until its your turn to act, and in the mean time, keep an eye on the people who act after you, and if they look at their cards, their face can often give away, what they feel the strength of their cards are.

The only real important exception to this that you need to pay attention to is if a person is holding a frown, scowl, snarl, or any kind of angry or aggressive expression that involves the mouth being mostly closed. In that instance, the corners of the mouth are still effected in the same way, but because they’re consciously trying to hide it, you’re going to get the same movement because it takes the same fraction of a second to send the signal from the brain to hide it. The corners of the mouth in this instance will NOT curl upward. They will flatten out(like the first explained expression) lips usually pressed together. The x-factor here is, they felt the muscles move(since frowning is a relaxed position), and they know you could’ve seen it. So what they’ll do 9 out of 10 times is lock their mouths in that flattened position, and try to portray an indifferent expression by relaxing the muscles in the forehead, and between the eyebrows. This tip can be used; at any point in any hand. But must be used when they are waiting to view a card(or cardS if its preflop.)